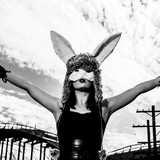 Vanderocker is an American psych-rock project led by frontwoman Adrienne Vanderocker, who comes from a Dutch-American family of classical musicians in Austin, TX. Being the writer for the project, much of Vanderocker’s classical influence along for her proclivity toward experimental elements can be heard throughout the VDR’s catalog. VDR’s early music was an experimental variation of retro rock blended with electronica. Following her debut album, Jupiter’s Kiss, VDR broadened her sound with a variety of singles ranging from devotional music, to roadhouse blues, trip hop, and as well as comedic opera music. The project continues to experiment with musical styles and has just released a psych desert rock LP, largely written and tracked in Joshua Tree, titled Point Defiance.