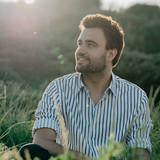 As a child of Spanish-Dutch parents Koen Alvarez grew up in a culture of connecting. You can see it right away in his Dutch-Spanish name. Dutch sobriety and structure and the typical Spanish warmth and striving for beauty mix naturally in his music. Spending his childhood in the hills of the Catalan Lloret de Mar, he saw a lot of influences blend into a fertile soil for his music. At home there was always sun and music. When Koen's Spanish father came home from work around midday, he immediately turned on the stereo. There was a piano, and a guitar that his Dutch mother used for her lessons. In the summer their house was always full of friends and family, bringing their own stories and music. Music grew naturally in his life. Through his last years of high school and his engineering degree in Girona Koen started to make music more actively. He chose guitar as his main instrument, not because of his Spanish roots, but mostly because you can take it easily to your listeners. He writes his own songs, plays all the parts and records everything at his (home)studio. He likes to keep his lyrics personal and specific, in the hope listeners can identify with them more easily. Everyday experiences and observations give him an inexhaustible source of inspiration. Koen’s natural playground is Indie-Folk because it’s the medium where he can best translate the emotions he wants to communicate into music.