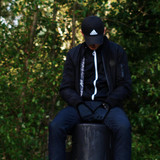 As an emerging artist and producer based in Gothenburg Sweden, Nørd is shaping his emotions into electronic music and through this put sound to his life. Nørd’s music is influenced and inspired by artists such as ZHU, Robyn, RÜFÜS DU SOL and mostly bear a tone of melancholy. From his debut in 2018 he’s released the two singles “Allt jag är” and “Alone” and now just released his first EP "Ensam". As a ghost producer he's also worked with talented artist and producer Donnie Castle on tracks such as “Egodød” and “Côte D'Azur”.