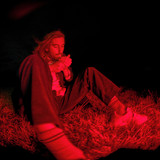 Hologramme is Canadian producer and composer Clément Leduc’s musical brainchild. Defined by a constant search for love in things, his music translates into unique dreamlike and cinematic soundscapes using warm synths, intricate textures and deep basslines. Hologramme's collaboration with visual geniuses Baillat Studio made a huge impression in 2020 with the release of two music videos for his last singles, Alaska and Préface. Collaborations are at the center of Hologramme's workflow, his latest work features Lunice, Fakear, Robert Robert, Ouri and Moses Bélanger on a remix album revisiting Felicity. Film scoring is also an important facet of the composer. More recently, he has collaborated with brands such as CF Montreal (Impact), LNDMRK / Mural, Locomotive, Gender Creative Kids in addition to lending his music for Jockey, a feature film awarded this year at Sundance Film Festival. Its latest campaign for Tourisme Québec, a collaboration with Les Louanges, has been on air since June 1st across the province. Meanwhile, the artist is launching his own record company, Société Holographique de Montréal, with a mission to spread local artists internationally through the use of new technologies and visual arts. Hologramme is currently working on its next LP, CIEL, an album that will once again highlight friends and collaborators of the artist.