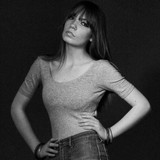 Elizabeth Riordan is a singer/songwriter from Melbourne, Australia. After graduating from the Australian Institute of Music, Elizabeth started performing as 'Elia', touring the major cities of Australia and releasing two EPs of her own compositions.  The “Elia” EPs gave Elizabeth the opportunity to write for Universal Music, EMI, BMG, as well as with Nightingale Music where her song “I’m In Love With You” won the prestigious Mark Award for Best Production Music Song (Vocal). The song has also recently been featured in multiple episodes of the Netflix series, Cable Girls and is quickly gaining in popularity on streaming services.