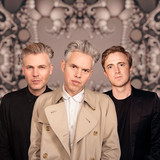 One of Australia's most celebrated electronic acts, PNAU have incorporated house, funk, jungle, rave, and pop into their music over the years, snagging multiple ARIA awards and a UK #1 album with Elton John along the way. Formed in the '90s by school friends Nick Littlemore and Peter Mayes, PNAU debuted with a mix of acid house and trance that distinguished them from the rock acts Australia was known for. The combination of house, funk, hip-hop, Latin and jazz on the duo's debut album, Sambanova, earned PNAU an ARIA Award for Best Dance Release. PNAU collaborated with the The Sleepy Jackson's Luke Steele on the track "With You Forever" and Ladyhawke on "Embrace" for their self-titled third album, earning wide acclaim and inspiring Littlemore & Steele to work together as Empire of the Sun, with "Walking on a Dream" achieving worldwide success. PNAU won a fan in Elton John, who collaborated with the group on Soft Universe and #1 UK Album Good Morning To The Night (Deluxe). PNAU then added Sam Littlemore as a member, with their first album as a trio, Changa, seeing them return to the dance-oriented sound of earlier albums. Lead single Chameleon won an ARIA award for Best Dance Release, with the album reaching 200M+ Spotify streams. In 2019, Pnau delivered disco-inspired single Solid Gold with Kira Divine & Marques Toliver, and the anthemic All Of Us with Ollie Gabriel. 2020 saw the band deliver uplifting single Lucky, featuring Alister Wright of Vlossom on vocals.