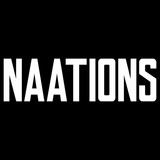 One part vocals, one part machines - NAATIONS consists of just that. A strong nod to an island grit and verses that delve into the human condition, sitting atop danceable rhythms and catchy hooks. A project spanning sounds as much as continents, NAATIONS shake up a sparkling cocktail of styles, melding melody with bass bin shaking bottom end. Nicky Night Time (Van She) &amp; Nat Dunn’s musical chemistry was apparent from their first meeting and continued into a mutual muse relationship that is now NAATIONS. ‘Kingdom’ is the duo’s first missive, a powerful statement of intent that outlines the duo’s realm. With a finely tuned swagger reminiscent of an M.I.A., Elliphant, Rihanna or Rudimental track, Dunn riffs on reality and ambition, promising to move the empire.