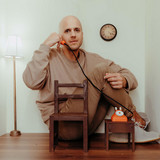 A record assumes the role of a friend. You turn towards it in times of introspection and celebration alike. Songs console, comfort, and confer confidence. When necessary, they double as a hand to hold or a shoulder to cry on. A heightened sense of empathy defines the music of Milow. His songs extend a familial embrace as they share relatable recollections with the candor of a late-night conversation among the closest of friends. The critically acclaimed award-winning Belgian singer-and-songwriter’s ability to translate personal subjects into universal anthems transformed him into an international phenomenon. Amassing nearly 200 million global streams by 2019, winning 12 Music Industry Awards in Belgium, and selling out shows all across Europe, he first made waves with his 2009 self-titled European debut, "Milow". Meanwhile, a Time Magazine-approved acoustic cover of “Ayo Technology” by 50 Cent and Justin Timberlake exploded with 90 million Spotify streams and 70 million YouTube views. In the aftermath, his discography would grow to encompass North and South [2011], Silver Linings [2014], and Modern Heart [2016]. “Howling at the Moon” clocked over 45 million Spotify streams and counting. Along the way, he dove into cultivating what would become Lean Into Me [2019]. Pairing the 21st century production of Modern Heart with a heartfelt folk core, he sharpened his signature style. The new album, containing "Whatever It Takes" and "ASAP" is planned for early 2022. Stay tuned.