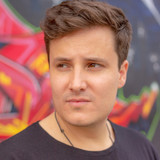 Leo Teran is a Music Producer with a broad background on multiple instruments such as Drums, Guitars and Piano. Leo was born in Miami, FL but,has lived in different locations such as Quito, Ecuador. Where he spent some of his youth, Boston,Massachusetts where he attended Berklee college Of Music and graduated with a bachelors Degree on Music Business and Music production.Later on moved to Valencia,Spain to further specialize on Music production where he acquired the love and passion for Electronic Music. To this day Leo has had Multiple releases on European and American labels. (Revealed Recordings, Sirup Music, Phonetic recordings, EDM Sauce, Global 305). In the music industry he has worked with big names such as “Ray Roc”. (The Roc Project), Magic Juan (Proyecto uno) Kevin Lyttle (Soca King) Nino Lucarelli (ROCK STAR). amongst others.. His future plans involve producing and collaborating on new music with talented producers as well as, continuing efforts with major labels for upcoming music releases. Lastly he Aspires to perform live for all his music supporters around the world!