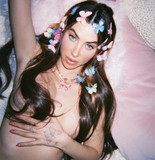 “Sicaria” is the debut single of Valentina Fradegrada aka VALENTINA, already played by Diplo and Dillon Francis. “Sicaria” is already in the streets in Latin America, especially in Cuba and Mexico where VALENTINA planned a club tour in March 2020 for the premiere and the release of the single (delayed due to Coronavirus). This track is sure to be one that will be a major hit thanks also to the production of Will K, Australian artist supported by Martin Garrix, Tïesto, David Guetta, Alesso, Hardwell, Steve Angello and many more. But who is VALENTINA? She was the first Italian model to set up a fashion and lifestyle blog and, with over 2,5mln followers on Instagram, her fame has long gone beyond Italian borders. She launched the Upside-down bikini trend which became viral worldwide evolving in a proper brand afterwards, she was the only European selected to be the cover Playmate for Playboy Mexico and this year she will also take part in the casting to pose on the cover of the famous magazine Sports Illustrated.