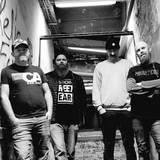 ​Kill Trip delivers an in-your-face sludge rock soundtrack for the end of humanity! The band plays sludgy riffs combined with energetic punk and hardcore elements. Justesen's vocals range from a dark and somber “Weltschmerz” tone to an aggressive “FUCK THE SYSTEM!” assault. The band is inspired by the bands they listened to when they were young, like Life of Agony, Down and Alice in Chains. But also newer acts such as Red Fang, Mastodon and Kowloon Walled City are inspirations. The lyrical universe circle around the desperation and frustration of poverty, drug addiction, death, the degradation of the climate, war, religion/spirituality, mysticism and the natural elements that surround us. A special driving force is the fear of becoming the generation who will witness the demise of the planet. Kill Trip is: Karsten Gøeg, drums Thomas Gajhede, guitars Claus Langkjær, bass Rasmus Justesen, vocals The first three come from the hard rock band Oktan (2006-2014 with