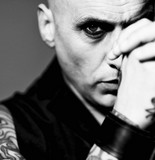 “Electrifying Sound” RADIO X “Berlin Bowie with a Cool Rock Swagger” PLANET ROCK RADIO  BAZ.M RELEASES GRIPPING NEW SINGLE ‘EVIL TWIN’ Baz.M’s progressive mixture of guitar rock, punk attitude, and electronic textures has been steadily attracting attention for years. Now, with his newest single, he is taking a major artistic step forward, adding gothic electronic flourishes to his signature sound.   ‘Evil Twin’ grabs the listener’s attention immediately with its juxtaposition of casual whistles and menacing synths. Like with most of his releases however, the main attraction is Baz’s intensely charismatic vocal performance. The melodies he crafts are as memorable as anyone in the genre, and ‘Evil Twin’ is no exception. With a powerful hook and just the right amount of experimentation, this track will demand constant re-listens.   Glasgow based artist Baz M sings with the passion of a man who has been to hell and back and survived with his spirit intact. A rock’n’roll lifer with several UK and US tours under his belt. Mixing Punk, Electro Synth Pop and Heavy Guitar Rock, he merges these influences into a wholly unique sound that only he can make. He is currently preparing the release of his Debut Solo Album ‘Split.’ A diverse collection of songs featuring open hearted storytelling, cathartic emotional release, and frantic rock energy, it is the perfect introduction to Baz M’s world.