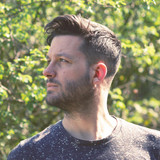 Combining his northern brass band education with a more esoteric and electronic side, composer Richard Wilkinson has worked on feature films like Heathen and Darkest Day as well as a diverse set of video games, from the TIGA 2017 ‘Best Strategy Game’ Castle Creeps to the upcoming official Narcos game, based on the hit Netflix series. Most recently Richard has completed a wide-ranging score for the first feature-length VR episode of the British Sci-Fi series Doctor Who, incorporating everything from granularly deconstructed TARDIS controls turned into drums, to a full orchestral session and a featured solo cellist. Richard's music can be heard away from screens, with additional music for the Gruffalo ride at Chessington World Of Adventures to supplement Rene Aubry's charming score, and the soundtrack to the Sydney Sealife Aquarium's 'Day and Night on the Reef' exhibit. Richard is currently working on a number of unannounced projects alongside his second contemporary classical album of original works, 'Lines Between Lives' due for release late 2021.