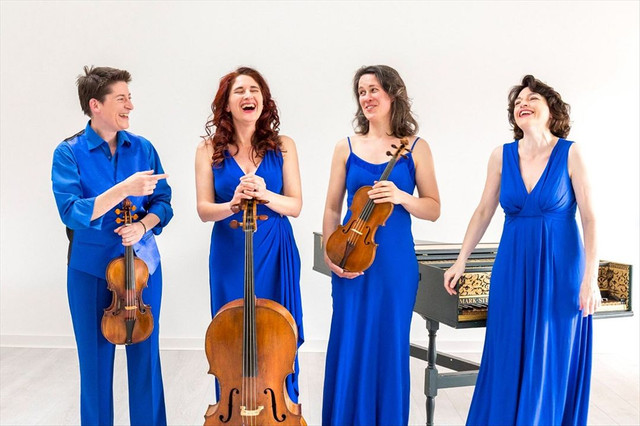 Taking its name from the London street where George Frederick Handel lived from 1723 until his death in 1759, the Brook Street Band was founded in 1996 by Baroque cellist Tatty Theo. The group has evolved into one of the leading period-instrument ensembles specializing in Handel's music, both playing his chamber works and collaborating with larger forces. A favorite on the BBC 3 classical radio network, the Brook Street Band has performed at the Dartington International Summer School, the Barcelona Early Music Festival, and Kuhmo Chamber Music Festival, and has established its own festival, love: Handel, in Norfolk, U.K. It has regularly given concerts at London's Wigmore Hall. The group has created new pieces, partly by commissioning new texts to be fitted to Handel's music. It has an ongoing Handelian collaboration with several authors and librettists including Louis de Bernières and Alasdair Middleton, fusing newly commissioned prose with Handel's music. The ensemble created a program for schools entitled Getting a Handle on Handel, a project that resulted in a new oratorio, Il Pastorale, L'Urbino e Il Suburbano, by composer Matthew King -- a response to Handel's L'Allegro, Il Penseroso ed Il Moderato. The Brook Street Band made its recording debut on the Avie label in 2004 with The "Oxford" Water Music, a collection including Handel's famous composition along with related works by Corelli, Geminiani, and Leclair. It has continued to record for Avie, releasing music by both Johann Sebastian and Carl Philipp Emanuel Bach along the way, in addition to Handel works. In 2013 it issued its first volume of Handel trio sonatas. The group's membership in 2017 included, in addition to Theo, Swedish-born violinist Rachel Harris, violinist Farran Scott, harpischordist Carolyn Gibley, and Portuguese-British recorder player Lisete da Silva Bull. Soprano Nicki Kennedy has a longstanding relationship with the Brook Street Band in Handel's vocal works.