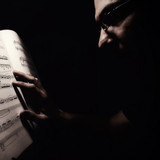 Eduardo Viñuela was born in Mexico City, Mexico one summer day of june 1976. He began to study piano with Maria del Socorro Suarez at the age of 11 and several years after, he studied with the teacher Maria Luisa Rasgado, director of the J.S. Bach Academy of Music. In the last years, he has been developing a technique of composition with the use of mathematics like graphs, transversals and matroids. The main focus of his research is moving towards a new approach to musical composition with the aid of incidence geometry. His works have been performed at the most representative places of Mexico City as well as in the Cities of New York, Chicago and The Hague Netherlands. Related artists: Giya Kancheli, Max Richter, Nils Frahm, Ólafur Arnalds, Valentin Silvestrov, Alfred Schnittke, Arvo Pärt, Zbigniew Preisner, Eleni Karaindrou, Evanthia Reboutsika