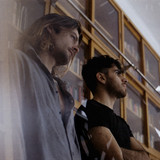 U.K. duo Whilk & Misky make an emotive, atmospheric brand of pop that fuses their love of synthy, electronic minimalism and soulful blues and folk. Formed in London in 2012, Whilk & Misky feature singer/guitarist Charlie Dickens and electronic producer/instrumentalist Nima Khaste. Prior to meeting each other, Dickens had grown up in Kent listening to a mix of classic folk and rock artists. Conversely, the Iran-born, Dubai-raised Khaste had been drawn early on to avant-garde electronica and icy synth-based productions. The pair first met in London in 2012 after Khaste's then band popped into the diner where Dickens was working. Initially, Dickens was more interested in dating the band's lead singer than forming his own group, and accepted an invitation to a show. However, after showing up late and discovering the singer was already spoken for, Dickens instead ended up hanging out with Khaste. Despite their divergent musical taste, they quickly realized they shared a creative synergy. They became flat mates and started writing songs, framing Dickens' throaty, sanguine vocals and earthy melodies with Khaste's grayscale soundscapes. By 2013, they had garnered attention online for their moody debut single "Wing Clipper." An EP, The First Sip, followed in 2014 and the duo signed to Island Records. In 2016, Whilk & Misky delivered their first single for Island, "I Want Your Lovin'." ~ Matt Collar