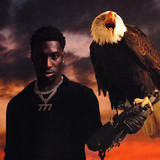 A Dutch rapper who also operates under the moniker Balmainpapi, Frenna cut his teeth as the frontman for hip-hop collective SFB before striking out on his own in 2015. Born Francis Edusei in 1991 and based in The Hague, Frenna formed SFB (Strictly Family Business) in the early 2010s alongside fellow rappers KM, Jandro, and Priceless. The group found regional success in 2014 with the release of their debut mixtape Reset the Levels, which led to the group appearing on the New Wave project in 2015 alongside other up and coming Dutch rappers like Ronnie Flex and Lil' Kleine. Looking to branch out, Frenna amassed a slew of features and collaborations, and by 2016 he had enough of his own material to release Geen Oog Dichtgedaan, his debut album. The following year saw SFB issue their sophomore long-player 77 Nachten, and in 2018 Frenna released his second studio album, Francis, which included the hit single "Speciaal." ~ James Christopher Monger