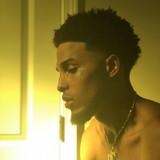 Chino comes from Fort Valley, Ga a small town outside of Atlanta, the current home of rap’s most idiosyncratic lyricists and vocalists. He had a childhood stuffed with its fair share of struggles, and it took him until he was a teenager to realize that these experiences gifted him with the drive, and skillset, to create intense, heartfelt music for people who identified with his pain. At just sixteen years old, he dropped out of high school. Eventually, he turned his struggle into lyrical diamonds and has been able to make two well-received projects so far: Cold Hearted and Too Many Losses. His initiative would later lead him to finding a mentor-like figure in multi-platinum producer Nash B who showed him the ropes of the industry. Since then, Chino’s been one of rap’s most interesting new figures, a burgeoning firebrand known for mixing melodic styles. With co-signs from No Jumper and the UK’s Dummy Mag, it’s clear many people from around the world have begun to tune in to hear what Chino’s been saying and continues to say. To date, Chino has amassed over 1.1 million streams, 1 Million+ views, and an Instagram following of 28k+. His impact can be attributed to his authentic approach to rap and, surprisingly, his process of making music which is a unique take on two well-tested methods. It's safe to say Chino Cappin is definitely here to stay.