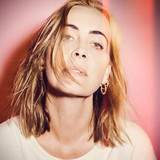 Dutch alt-rock singer/songwriter Anouk rose to stardom on the heels of her 1997 hit single "Nobody's Wife," igniting a career that would see her become not only one of the most successful artists in her native Netherlands, but also widely popular throughout much of Europe. Mixing hard-edged rock, pop, electronica, and blues, albums like 1999's Urban Solitude, 2004's Hotel New York, and 2009's For Bitter or Worse all went platinum and cemented Anouk's status as a perennial chart-topper with impressive staying power. The following decade saw her competing in the Eurovision Song Contest and keeping her number one streak alive with releases like 2013's Sad Singalong Songs and 2016's Queen for a Day. She also made her first Dutch-language album with 2018's Wen d'r Maar Aan. Born in 1975 in the Hague, Anouk grew up in a musical family; her mother was a singer in a blues band. By the time she was 18, Anouk had joined a local R&B group, but it was short-lived -- she left soon after, having been accepted by and subsequently attending the Rotterdam Music Academy. In 1995, Anouk started her own band, and at a music festival that same year she got her big break, joining Dutch legend Barry Hay of Golden Earring on-stage. Impressed, Hay joined with Golden Earring guitarist George Kooymans to write a song, "Mood Indigo," for the young singer, and it only narrowly missed the Dutch Top 40. By 1997, Anouk's career had taken off with the release of the single "Nobody's Wife," along with her debut full-length, Together Alone. "Nobody's Wife" became a Top Five single across Europe, and the album topped the Dutch charts, quickly reaching platinum status. The album spawned two more hits with "It's So Hard" and the Top Ten "Sacrifice," and also earned Anouk three Edison Awards, including Best Dutch Female Vocalist, in 1998. Her follow-up album, 1999's Urban Solitude, found Anouk incorporating ska into the first single, "R U Kiddin' Me," as well as exploring hip-hop and funk on tracks like "The Dark" and "Don't." It too was hugely successful in the Netherlands, although not as well-received across the Continent. In addition to strong sales at home, it garnered the singer two more Edison Awards. In 2001, Anouk released Lost Tracks, a collection of unreleased material. It secured her position as one of the highest-profile musicians in the Netherlands, giving her yet another chart-topping album. Her 2002 release, Graduated Fool, was a hard rock album, while 2004's Hotel New York was much softer and featured two Top Ten Dutch singles, "Girl" and "Lost." The rest of her albums of the 2000s -- including Who's Your Momma? from 2007 and For Bitter or Worse from 2009 -- were reliable chart-toppers: all featured multiple Top Ten singles, and all went at least double-platinum. After releasing To Get Her Together in 2011, Anouk represented the Netherlands at the 2013 Eurovision Song Contest and made the finals with her entry "Birds." The single also topped the Dutch chart. An accompanying album, Sad Singalong Songs, appeared that same year, and gained favorable reviews across Europe. A concert album, Live at Symphonica in Rosso, appeared early in 2014, and by the end of the year, Anouk was back with her ninth studio album, Paradise and Back Again, which promptly debuted at number one on the Dutch charts. Marking a particularly prolific run, she returned in 2016 with two full-length albums beginning with the more pop-oriented Queen for a Day and followed in October of that year by the harder-edged, Fake It Till We Die. Released in late 2018, Wen d'r Maar Aan was Anouk's first album to be sung entirely in Dutch. ~ Tom Demalon, Rovi