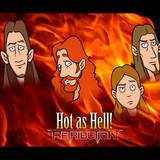 Formed in August 2003, Retribution is a Dutch Death/Thrash metal band, whose members emerged from various local bands. Loaded with over 10 years of Metal experience, diverse musical preferences, a sense of humor and some impressive manes. Retribution’s music can be described as a mix of bands like: At the Gates, Hypocrisy and Kreator. They are trying to break new ground, without losing touch with the bands that inspired them over the years. With the arrival of a steady bass player in April 2006, they were finally complete. Currently having three releases behind their name, the guys are ready as ever to take on stages everywhere, and kick some serious ass !!. So if you’ve got an earache, and you don’t know where it came from. And if you can find them… Maybe you can blame… RETRIBUTION !!!