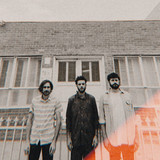 The Lighthouse And The Whaler

Featuring The Lighthouse And The Whaler

The story of Cleveland, Ohio’s The Lighthouse And The Whaler is one of perseverance and determination; of personal, cumulative growth and maturity. Formed in 2008, the current trio of Michael LoPresti, Mark Porostosky, and Ryan Walker have released three full-length albums and headlined tours from coast to coast, picking up accolades from the likes of Rolling Stone, NPR, and many more outlets along the way. They’ve been described, at various times over the past decade, as a folk, alternative, and rock band – and the truth is they’ve dabbled in all these areas, and more – but fitting into one box has never been a defining factor for them. “For me, our sound is more like a concept or an existential experience than it is a specific genre,” LoPresti says. “If you have to boil it down that’s fine, but I want it to be more than that: I want it to be a way of understanding oneself. I can find something about myself that I didn’t realize was there, or I can go and feel emboldened to be the person that I want to be and am trying to be.” This is The Lighthouse and the Whaler that we always wanted it to be. There’s something there for you in the songs. There’s something you can find for yourself, no matter where you are in life, it came from a place where we were finding that for ourselves as well. We tried to make every single moment worth the listen, so that people will want to go on that journey again.