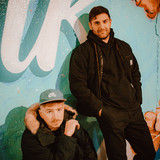 Progressing from early releases on more fledgling labels it was in 2017 that Critical first picked up on their emerging talents, releasing music on the Binary and Systems series and solo releases on Critical itself. Culminating in their huge collaborative ‘See It Our Way’ EP released in February this year, Andy & Nick have now taken the decision to combine their skills to form a new allegiance; introducing Fade Black, formally known as Shyun & Cruk. “We just enjoy making tunes together, and feel we do it better with a couple beers and a bit of banter in the studio, so after much talk, we decided we wanna do this music thing together. But this doesn’t mean compromise in any way, we’re working smarter and faster than ever before and are going to be bringing you the best blend of both our styles in this new project, more future and forward thinking than we’ve ever been.” In October 2019, the duo launched their debut EP entitled ‘Condemned‘.