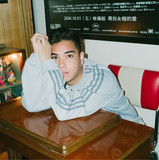 Influenced by the French concept of "water" (eau), zeauk's artist name reflects the music he makes; mutable and sublime, sustaining and destructive. The merge between that and his given name expresses the battle between what is perceived and its reality; one's intimate self and identity. He combines contemporary R&B with melancholic tunes to convey his vision of musical intimacy.  zeauk, also known as Zeus Rectra, is a Kuala Lumpur-based independent music and visual artist; hailing from Manila. Following a creative divergence, zeauk managed to establish his name and has built an online following through photography and creative direction since 2016, before venturing into the music scene in 2018.  Eventually, through his songwriting, mellow and gloomy nocturnal sonics from his debut single release, ​for ​the ​heartbroken, he gained notoriety in Southeast Asia's music and creative space after his song had been featured in most of Spotify's New Music Friday playlists across the region, sparking further pursuance of him to release more songs and collaborate with different creative artists independently.   zeauk currently seeks to shift his musical concept more towards the roots on which he grew up on. Drawing inspiration from some of his favorite artists and producers such as - Bryson Tiller, Jason Dhakal, GIRIBOY, and Crush - to name a few.