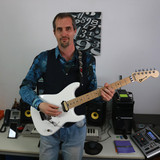 Daniel Bautista is a Spanish guitarist (born in Malaga in 1980) who has been in a number of bands like Evil Inside, Hipospadia or Ciruelo Cilindrico. He started playing the guitar in 1993, at the age of twelve. His first guitar was a classic one; it wasn't until 1994 when he bought his first electric guitar: a red used Aria Pro II. And this year he also started playing in bands. Daniel Bautista's solo career really begins in 2000, when he still was in Hipospadia. He recorded two experimental albums called "Autoindulgence" and "Alone", only for his friends. Some material from these works can be found here and there in his albums. In 2002, a Hipospadia's project to cover classic pieces would become the "Classics and Soundtracks" collection over the years. During the 2002 Summer, Daniel also composed many experimental songs, which were published in the album "Recycle Bin" (2008). In 2004, he started his website, where he publishes all his news, dates, music and photos. Daniel came back to its solo career in 2007. While he (patiently) waited for the release of the Ciruelo Cilindrico material, he composed and recorded the EP "Music For A Film", a soundtrack played by a rock band. Since then, he has released (and is still working in) a number of albums with experimental and progressive rock/metal, classic covers, technical guitar stuff, acoustic pieces and orchestral music. He has left all his bands in order to have more time for his great passions: his family and his music.