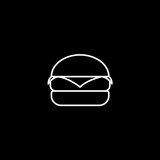 BVRGER is a British-Italian artist, songwriter & producer born and raised in Rome, Italy to a British mother and an Italian father. His mother was a Soul-singer in the 80s while his father is an accomplished guitarist that toured throughout Europe. BVRGER made his breakthrough in 2016 after his debut single "The Cool Kids" was released through German independent label NDYD Records and quickly gathered worldwide attention, going viral in countries like the USA, UK, Australia, Germany and more. Throughout 2017 to 2019 he attended numerous songwriting sessions in London, Barcelona, Vienna, Berlin and Milan, while releasing non-genre binding music as BVRGER ( "Cyberlove" , “Tease”, “Miss.Call”, “Strangers”, “HER.”) before releasing his EP "BRAINFOOD" in Mid-2019. In Mid-2018 he signed a publishing deal with BMG / Starting Lineup. In Italy, BVRGER is renowned for his productions for Il Tre. Their first collaboration "Cracovia, Pt. 3" has been certified