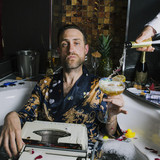 Credited by the BBC as “King of Sound, Ruler of Beats”, Beardyman is an award winning multi-vocalist, musician, a digital superstar, beatboxer, a groundbreaking live looping pioneer and a musical and comedic talent championed by the likes of Tim Minchin, Herbie Hancock< Imogen Heap, Jacob Collier and Jack Black amongst many more. Beardyman’s rise to success began with him winning the UK Beatbox Championships in 2006 and 2007 and his iconic one take wonder Kitchen Diaries. Creatively shackled by technology vs. his vast musical ideas, he developed the world’s most advanced live music production system, known at the BEARDYTRON, allowing him to improvise studio quality, cutting edge dance music in real time. He unveiled the BEARDYTRON at the annual global TED conference to a standing ovation. He is a festival favourite, having toured the world consistently for over a decade. His collaboration with Fatboy Slim and Calvin Harris "Eat Sleep Rave Repeat" he improvised in one take over 14 mins to become a global phenomenon and he won Best Dance Music Video in 2016 at the UK VMA's for his single Mountainside. In 2019 Beardyman released 6am (Ready to Write) featuring Joe Rogan on Sony/RCA and won the UK Music Video Award for Best Dance Music video directed by Ian Pons Jewell and shortlisted for Best Video of 2019.

In Feb 2020 he launches Sheer Volume, a project that will see 52 singles, videos, live streams, 12 podcasts and four albums released within one year. Good grief.