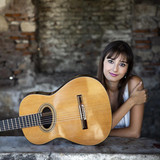 Begül Erhan who was born in Ankara,Turkey; has started giving concerts shortly after the beginning of her guitar education. Guitarist performed in many cities around her country and through her concerts maybe many people listened classical guitar first time in their lifes. Begül gave a solo recital in Vienna Konzerthaus, one of the most pretigious hall in Europe on 2015 and right after that she gave concerts in Italy. She also being invited on international festivals for concerts . Although she played in many cooperations with different artists such as Wiktoria Szubelak, Thu Le, La Maya Yoshida. Begül Erhan has participated many masterclasses from renowned guitar virtuoses such as Roland Dyens, Margarita Escarpa, Ricardo Moyano, Pavel Steidl; got courses and critics. Begül’s debut album released by Ada Music in April 2017 which includes Anatolian folk music arrangments for classical guitar. This album also the first solo female classical guitar album made in Turkey. Her second album consist of pioneer of the classical guitar music ,guitarist & composer Spanish Francisco Tarrega under the label of Ada Music again. Guitarist continues her career as an album recording artist and gives concerts regularly.She also gives concerts under her project ‘Guitar Recitals to Anatolia’ which aims making classical guitar recitals in cities where hasn’t take part of recitals much