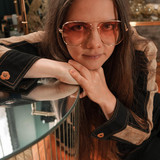 Born in the US, but UK bred,

Arielle began studying music at the age of 5. A child prodigy, she attained a degree from Musician’s Institute in Los Angeles, and continued her education at London’s ICMP. Discovered in 2010 by Nuno Bettencourt, she signed with American record label Open E’. In the years that followed, she made a name for herself touring North America and the UK, opening, & playing with Heart, Joan Jett, Graham Nash, Country Joe McDonald, Guns N’ Roses, members of Deep Purple, Eric Johnson, Gregg Allman, Keith Urban and Cee Lo Green, and more. At the age of 18,