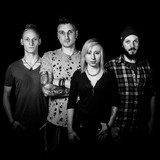 To make nacked Rock ready for the mainstream again, that is the vision of the band Dislike Silence. With a bang they entered the spotlight in 2019 and showed ever since, that they can cast a spell on the masses faster than they can play. Like a fist to the face, the female-fronted formation with their 1,60 m tall singer, captivates through extraordinary vocal capacity. Dislike Silence was found in July 2016 in Loerrach (Germany). In 2018, after a few reshuffles, the perfect lineup was found - four musicians with a common goal. The band became public for the first time in summer 2019. At the same time their debut-EP „Human“ and the fitting music video for the latter were released.