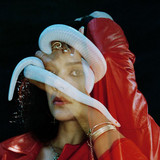 Crafting a mystical indie-rock sound that drew comparisons to Kate Bush and Björk, Bat for Lashes is the project of Natasha Khan. Born into the Khan family of squash players -- which included her father Rahmat and her grandfather Nasrullah -- the half-Pakistani, half-English singer/songwriter moved to Hertfordshire, England when she was five and taught herself to play piano when she was 11. She conceived of Bat for Lashes while on a trip to San Francisco, drawing on inspirations like Steve Reich and Susan Hiller, as well as the multimedia installations she learned to create while studying art at the University of Brighton. She continued to work on her music as she studied childcare and taught at a nursery school, ultimately releasing Bat for Lashes' debut single "The Wizard" early in 2006. Her acclaimed debut album, Fur and Gold, arrived that September and was shortlisted for the 2007 Mercury Prize; the following year, she earned nominations for British Breakthrough Act and British Female Solo Artist at the Brit Awards. While writing songs for her second album, Khan traveled to the Joshua Tree and lived in Brooklyn, finding inspiration in local bands like Gang Gang Dance and TV on the Radio. Two Suns, an ambitious concept album revolving around Khan's hedonistic alter-ego Pearl, arrived in 2009 and featured collaborations with Yeasayer and Scott Walker. Like Fur and Gold, the album was nominated for the Mercury Prize; Khan received another British Female Solo Artist Brit Award nomination, and the album's lead single "Daniel" won the Ivor Novello Award for Best Contemporary Song. Bat for Lashes' third album, 2012's introspective, restrained The Haunted Man, became Khan's second Top 10 album in the U.K., and earned her a Best British Female Brit Award nomination; the single "Laura" was nominated for Best Song Musically and Lyrically at the Ivor Novello Awards. Khan spent the next few years collaborating with other musicians, most notably producer Dan Carey and the band TOY on 2013's "The Bride," a cover of a pre-revolution Iranian folk song that Carey released via his Speedy Wunderground label. The project expanded into Sexwitch, whose self-titled 2015 album featured covers of psych-folk songs hailing from Morocco, Thailand, Iran, and the United States. Khan also worked with Carey on Bat for Lashes' fourth album The Bride, a concept album about a woman whose fiancé has been killed in a crash on the way to their wedding. The album's lead single, "I Do," arrived in February 2016; Khan also directed a short film by the same name that premiered at the Tribeca Film Festival that April, with The Bride itself arriving in July. Her fifth full-length album, Lost Girls, arrived in September 2019 and included the single "Kids in the Dark." ~ Heather Phares