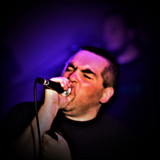 Blinky Blinky Computerband was established by Olaf Krautwurst in 2012 as the successor of his project Inside Agitator, which was active between 1994 – 2012. With Blinky Blinky Computerband, Olaf creates his own vision of electronic music, called “strange electro pop“, which can be described as a mixture of ebm, industrial, electropop, electro and ambient music. Blinky Blinky Computerband is a “one-man-project“, but it was and will be supported by different guest artists for vocals and lyrics from time to time. Olaf also creates remixes for artists like Attrition, Arctic Sunrise and others and he also has a DJ-mix series on Mixcloud.

Blinky Blinky Computerband released some album, single and compilation releases via digital distribution and also CD versions of "Inner Conflict", "Dystopia/Blue Ice", “Strange Electro Pop”, “For a better World” and “Fractured Sign”. All releases were made “do-it-yourself” and self-financed and released on his own label BBCom Music, but Olaf is also open for co-operations with other labels for future releases. Live Line-Up dor 2020: Olaf (vocals), Torsten (keys), Matthias (backing vocals & keys) https://blinkyblinkycomputerband.bandcamp.com/