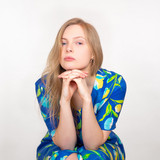 Born in Austria, raised in Poland and now based in London. Veronika Utri is a 23-year-old singer and songwriter with an unusual background. She grew up with an older sister and two younger brothers. Her mother is Polish and her dad is Austrian, so the whole family is bilingual. Veronika was born in 1998 in Austria but her parents decided to move to the capital of Poland a year after that. Music has always been played, as well as made, at her home and there was always a piano and a guitar in the house (as well as her dad’s recorder and didgeridoo). As a kid Veronika loved to dance, so dance and disco music were her favourites. Then, as a teenager she listened to Vanessa Hudgens, The Black Eyes Peas and Taylor Swift. At a very young age Veronika started attending piano lessons, then at thirteen she picked up the guitar as well. She's been writing songs for almost half of her life, ever since she was twelve. The subject matter was, and still is, mostly love but progressively also faith and deeper observations about the world and herself. She moved to the United Kingdom at age twenty one to pursue a career in pop music. It was the best decision she had ever made and she hasn't looked back since.