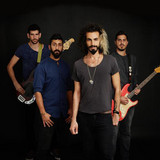 Buckets N Joints is an alternative rock band that started in 2012. These past years the band has made quite a journey by playing shows all around Israel Making a big impact wherever they play on any type of audience. On their way to release the band's first full album recorded in Austria by “Lords Of The Sounds” and produced by the band. The band performed more than 80 Shows a year and for more than the last 6 years all over Israel and toured on Stages across Germany and Russia. These days, the band is managed and promoted by “Firefox Music” in Germany. In May 2015, the band released their first EP Album “Safe By Release” which includes 5 songs that the band had produced by themselves. The EP won a contest at “The Akademia Music Awards” for “Best Rock EP” of the month in January 2016. In late 2016, Buckets N Joints performed 6 concerts across Germany. In summer of 2018, the band performed in "Dobrofest" festival in Russia and followed it with a tour in Moscow. The band made a name for themselves in the rock music scene of Russia After two great tours in Germany in 2019, the band will soon embark on another tour in Germany on summer 2020 to promote their First full album called “Offline”, which was released on October 25th 2019. New Album “Offline” is now available on Spotify, Apple Music, Deezer, Google Play, and all music platforms!