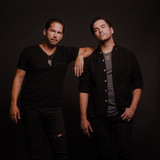 Formed by brothers Dameon and Gabe in 2001, Aranda is an emotionally charge rock band out of Oklahoma City. Possessing a a muscular sound with a plaintive core, the brothers made their national debut with their self-titled effort released on Astonish Entertainment that found the brothers with their first two hit singles "Still In The Dark" and Whyyyawannabringmedown" with the latter being covered by pop sensation Kelly Clarkson.

In 2012 the brothers released their sophomore record Stop The World that yielded 2 top 15 hits with "Satisfied" and "One More Lie". The album was produced by Johnny K.