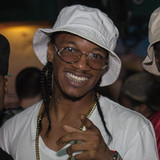 Young Wess was born and raised in South-East Jamaica, Queens, where he picked up character, style, and a love for the arts. He began drawing at an early age and would draw his action figures perfectly; way before he could formulate an essay. Wess was excited by cultural dances and deep melodic rhythms. Young turned his excitement, love, and passion of the arts into a career in the entertainment industry starting in music then branching out to television and film. As a CEO, Writer, Multimedia Producer, Publisher and artist, Young has his hands full with creating. He started writing at age 9 when a teacher tasked him with the job of populating a journal. He continued writing as he finally found something worth doing. Simultaneously, Wess found another escape which allowed him to be, "free" as he would put it. Music was a way for him to be able to dream and make those dreams become reality. Another picture became clear as Wess journey'ed along his path snd quickly become a go-to for him when creating; video production. He thought, "with these elements and combined processes the creative outcome could take reality to another level." Spending most of his time construction, arranging, and mixing Wess became affluent in editing and knows how to build a concept from conception to completion. Starting in the areas of music production he quickly adopted to the changing demands of the industry and incorporated video production to insure his vision is properly depicted.