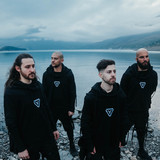 The 4-piece from Italy started in 2009 at the age of 15 and signed with Candlelight/Spinefarm Records. The band released 1 EP and 3 albums between 2012 and 2018 and achieved great results both live and online. Their debut album "Privilege to Overcome" was nominated one of the best thrash metal albums of the new wave by several blogs and webzines. Their single "L.F.D.Y." recently passed half a million views on YouTube and their songs have been included in official editorial playlists like "Thrashers" and "Metal Covers". In 2020, Ultra-Violence decided to leave their record label and become a completely independent band. They started working on new music with a brand new mindset, bringing in an external writer/producer (Joakim Karlsson of "Bad Omens") for the first time ever. Together they found a new exciting sound that perfectly channels all the messages and emotions they want to share with the world. They released 4 new singles in 2021 so far. The 4 songs have been included in official editorial playlists like "Adrenaline Workout", "New Core" and "New Metal Tracks" and they've been the fastest growing tracks of their career.