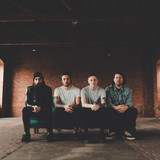 Locals Only are the hardest working band you’ve never met. High energy, no bullshit, four-piece pop punk from New York, the rambunctious new group released their self-produced / self-titled debut EP independently on April 28 along with a music video for lead single “You’re Sick”, May 1. Following, the band launched their new record to a sold out

Emo Nite LA on May 2, just before the premiering "You're Sick" via Journey’s TV, in-stores nationwide. The new single also received a notable spotify placement from the Hopeless Records Best of Pop Punk playlist. Locals went on to volunteer for the 2017 Vans Warped Tour in exchange for food, a bus number and a place to drive their new record. There, the band were tapped to perform on multiple dates and then went on to receive endorsements online from Dani &amp; Fil of Neck Deep, Movements and even Vans Warped Tour.