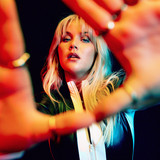 Inspired musically by nineties icons such as Christina Aguilera and Britney Spears, Aimée grew up in Dublin listening- diligently- to every vocal run, every empowering lyric and pure pop melody that Aguilera, Spears and their peers were releasing. Embracing the early noughties production style of Max Martin, but coupling this with a love of current artists such as Ariana Grande, Charlie Puth and Demi Lovato, Aimée began working on her solo material in early 2018, securing a run of Top 40 airplay hits in Ireland, with UK support from BBC, Kiss, Clash & more. Her single “Naked” reached #4 on the UK MusicWeek Pop Charts & #12 on the UK MusicWeek Upfront Charts. An upgraded, sold out debut headline show in Dublin’s The Grand Social, followed by taking to the 3Arena stage on the 2FM Xmas Ball & ringing in the New Year at Dublin’s New Year Festival Dec 31 2019 solidified Aimée's live prowess. With tour dates postponed for 2020, Aimée worked with Irish Women In Harmony to release the stunning cover of the Cranberries 'Dreams' - the time off the road also allowed Aimée to focus on writing new music - collaborating with writers & producers in Sweden, Norway, the Uk and Ireland. The first fruits of this landed with 'Shut Up & Dance', a new track