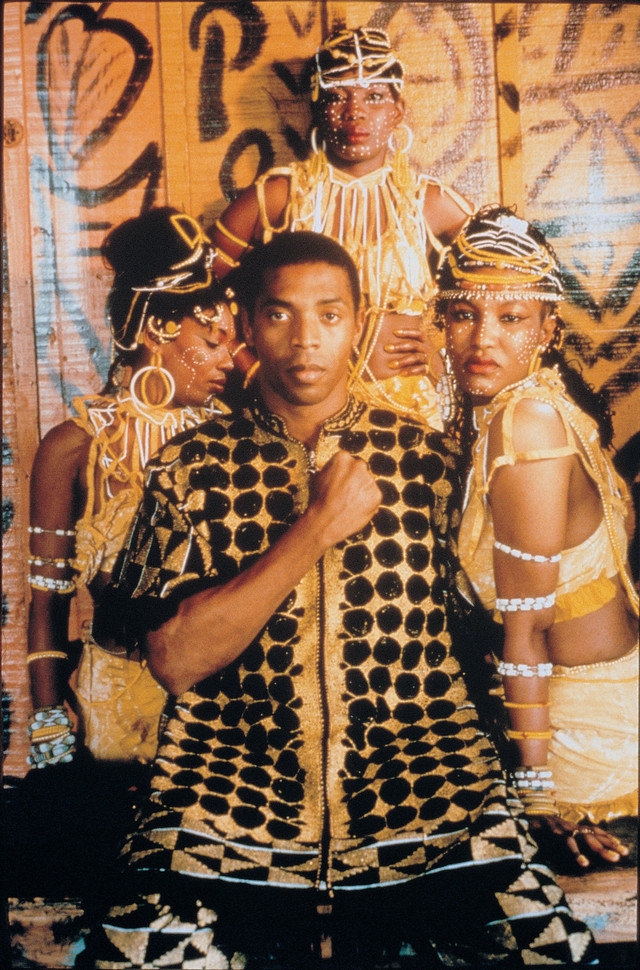 The eldest son of Afro-beat legend Fela Anikulapo-Kuti, Femi Kuti (born Olufela Olufemi Anikulapo Kuti) spent years playing in his father's band before eventually rising to superstardom following his father's death in the late '90s. Since few artists can match the elder Kuti's musical legacy, Femi's association with his father has been both a blessing and a curse. On the one hand, it's never been difficult for Femi to garner press or attention, and MCA went out of its way to push his career with considerable amounts of publicity. Yet on the other hand, no matter his individual accomplishments, Femi will forever be known as Fela's son. Practicing a similar style of Afro-beat as his father, Femi helped introduce the percussive blend of jazz and funk music to the international masses beginning in the mid-'90s, along with his father's same sense of political activism. After his father's death in 1997, Femi suddenly found himself the subject of immense attention. He responded by signing with MCA and embarking on his solo career beginning with Shoki Shoki. He won critical celebration around the world and began mounting efforts to break into the U.S. mainstream in successive years. Born in London and raised in Lagos, Nigeria, Femi began his musical career playing in his father's band, Egypt 80. In 1986, Femi started his own group, Positive Force, and began establishing himself as an artist independent of his father's legacy. In the mid-'90s, Motown offered him a record deal with its boutique label Tabu; Femi's eponymous debut album resulted. Released in 1995, the record won praise throughout Europe and Africa for offering a more streamlined and accessible version of his father's music. Femi embarked on an extended promotional tour, crossing first Africa, then Europe in 1996 and 1997. His solo career was off to a successful start, despite the dissolution of the Tabu label (and Femi's record deal with it). However, this problem became the least of Femi's concerns when his father died of AIDS-related complications in 1997. Shortly afterwards, his sister, Sola, also suffered an untimely death, making 1997 a truly dark year for Femi. He would later write "'97," a song that candidly reflects on this particularly tragic time. Yet with tragedy comes opportunity in the world of music, and Femi ultimately signed a major-label record deal with Polygram in December 1997, only months after his father's death. MCA made the most out of the situation, repackaging and re-releasing much of Fela's catalog and setting the stage for Femi's MCA debut album in the process. Following months of press and hype, MCA released Shoki Shoki in early 1999 to widespread acclaim from such esteemed publications as The New Yorker, Rolling Stone, and Vibe, not to mention other smaller publications. A year later, Femi returned with his second album, Fight to Win, and toured the States with Jane's Addiction in an effort to cross over to a more mainstream audience. Part of this crossover effort meant aligning himself closer to hip-hop and its sizable audience. Fight to Win featured a number of respected rap artists like Mos Def and Common. As expected, critics celebrated the album, though Western masses seemed rather indifferent to both the record and Femi's concert trek with Jane's Addiction. Over the next decade, several recordings of live shows and compilations were released, but for the most part -- with the exception of making a vocal cameo as a radio station DJ in Grand Theft Auto IV -- he avoided the recording studio, opting to tour instead. In 2008, he re-emerged with his first album in seven years, Day by Day, a definitive album that helped to establish Femi as a true original with his own unique style; it was nominated for a Grammy award. His 2011 effort Africa for Africa, a mix of new and re-recorded older material, was also nominated. The following year Kuti was inducted into the Headies Hall of Fame (the most prestigious music awards in Nigeria), toured with the Red Hot Chili Peppers in Europe, and became an Ambassador for Amnesty International. 2013's collection of all-new work entitled No Place for My Dream, issued by Knitting Factory, was not only critically acclaimed across the globe, it was nominated for a Grammy. On May 15, 2017 Kuti broke the Guinness world record for a single held note on a saxophone -- 51 minutes and 35 seconds -- via the technique of circular breathing (cycling the breath in and out simultaneously). In November, Kuti announced the forthcoming release of his tenth album, One People One World, and issued its title track as a video single. It showcased footage of him playing live at the Shrine, the memorial created for his father. He followed it in late January of 2018 with a second single, "Na Their Way Be That." The full-length One People One World, recorded mainly in Lagos with his longstanding band Positive Force, was issued by Knitting Factory in February 2018. ~ Jason Birchmeier, Rovi