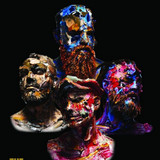 The Parlotones are Kahn Morbee, Neil Pauw and brothers Glen and Paul Hodgson. Formed in 1998, they have achieved massive success in their home country of South Africa, as well as success in international markets. The Parlotones are known for their hard work, humble attitude, and passionate dedication and commitment to their music. Their career has spanned over 20 years and includes achieving multi-platinum selling status and numerous awards. The band has toured internationally since 2007. They have regularly visited the UK, Germany, Austria, Switzerland and North America, as well as playing shows in South America, Canada, Australia, Japan and Russia. The Parlotones have released 8 studio albums: Episoda (2003), RadioControlledRobot (2005), A World Next Door to Yours (2007), Stardust Galaxies (2009), Journey Through the Shadows (2012), Stand Like Giants (2013), Antiques & Artefacts (2015) and Trinkets, Relics & Heirlooms (2016). They also have three live albums: Unplugged (2008), Live Design (2010) and Orchestrated (2017). In 2018, The Parlotones released a new album to coincide with their 20th anniversary as a band. The album is named China - after the traditional wedding gift for couples celebrating 20 years of marriage. The album was recorded at High Seas Studios in Johannesburg and the band made a unanimous decision to release all 25 songs that were recorded. They feel the whole body of work captures a unique sound and represents a new era for the band.