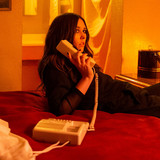 sydney sprague is making music for the end of the world.  the 29-year-old singer/songwriter, now a resident of phoenix, arizona, was encouraged by her parents to pursue songwriting early-on. she spent her formative years daydreaming alone in her room (decorated lovingly with britney spears and *nsync posters) and unknowingly incubating a talent that would ultimately lead to her future music career.  backed by familiar-yet-surprising hooks and hard-hitting, topical lyrics, sprague’s songwriting continues to evolve. with eyes on contemporaries like her 90’s idols, notably avril lavigne, she flawlessly carries that same fire, creativity, and wit into her 2021 release - maybe i will see you at the end of the world.   sprague announced that she had signed with rude records in october 2020. with an exciting team by her side she released two singles - "i refuse to die" and "steve" - both of which received a sweeping of support from the press, notably landing features in substream, refinery29, npr, uproxx, gig goer, alternative press, rock sound, and phoenix new times.  tonedeaf praised sprague’s outspoken lyrics and mature sound, declaring that the record is perfect “for those in the mood for some introspective indie rock by someone who isn’t afraid of speaking out” and calling ‘steve’ “your next must-listen.”  her debut lp - maybe i will see you at the end of the world - is out now on rude records.