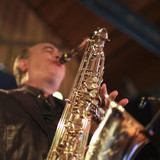 Distant Worlds is the debut album by saxophonist, composer, engineer and producer, Michael Alan. Alan’s healthy obsession with music technology sheds light on Distant Worlds featuring plenty of synthesizers, loops, keyboards, drum samples, and a smattering of real guitars played by Michael Alan, Michael Vince and Tony DePaolo and lots of saxophones, flute and EWI.   "This album has allowed me to bring all my musical skill sets – sound designer, musician, engineer and producer - into a single project that showcases my jazz, pop and rock influences and the many facets of who I am as an artist".   Distant Worlds has consistently been on the smooth jazz charts throughout 2018 with released singles such as "Talk To Me", "Morning In Tunisia" and Alan's groove jazz arrangement of the Spinners, "I'll Be Around". Distant Worlds has been described as "One of the most melodically compelling, stylistically eclectic Smooth Jazz albums of the year" by SmoothJazz.com and "One of the better debut albums to come along in Smooth Jazz in recent memory" by Smooth Jazz Magazine.