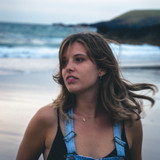 Cara Hammond is a soul inspired singer-songwriter who picked up her first acoustic guitar at the age of 11 and began to write her own songs. Growing up in the late 90s & early 00s Cara was heavily influenced by strong female vocalists such as Beyoncé & Alicia Keys. As Cara reached her teens, music from the likes of Amy Winehouse, Lana Del Ray & Ben Howard became her inspiration. She has since supported artists such as Charlotte Church & Mahalia, performed for BBC Introducing showcases, performed at festivals such as Boomtown Fair & Love Supreme, & played sold out shows around the UK, including the famous Water Rats in London. Cara's 1st 2 EP’s were self-released on SoundCloud in 2012, & after gaining momentum, she released a 3rd EP, 'Ray'. Following this she began writing around Europe, with major labels Universal, BMG and Sony. Cara's 2 singles 'Good Times' and 'Such A Mess' were added to the BBC Radio Wales ‘A Playlist’ and 'Such A Mess' also featured in the nationwide BBC Introducing Hotlist. In addition, 'Good Times’ has now reached over 300,00 streams on Spotify. Cara’s first release of 2020, 'Ready For the Fall', has been played on major radio stations across Asia, as well as being played as part of the BBC Quay Sessions (alumni feature Lewis Capaldi, Tom Walker) on BBC Radio Scotland. Cara Hammond's latest release, 'twenty four hours' is a self produced 3 track EP, written using her fan song ideas online, during lockdown.