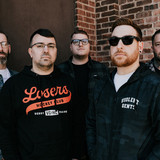 Featuring The Ghost Inside

The Ghost Inside make music for the outcasts. They’ve inspired audiences around the world to overcome obstacles, persevere, and find the strength to keep going when it feels like all is lost. On an early morning in November 2015, The Ghost Inside’s tour bus collided with a tractor trailer, killing the drivers of both vehicles on impact, and severely injuring the band and their crew. When The Ghost Inside returned to the stage for the first time, nearly four years later, Kerrang! called it “Rock’s Most Miraculous Comeback” in a detailed cover story about triumph over tragedy. Created with producer Will Putney (Every Time I Die, The Amity Affliction, Knocked Loose) and longtime friend/collaborator Jeremy McKinnon of A Day To Remember, The Ghost Inside is 11 songs of determination, deep resolve, reflection, and newfound hope. The Ghost Inside was formed in El Segundo, California, comprised of Vigil and a group of friends who found inspiration in the long tradition of Southern California punk and hardcore subculture. That early incarnation created Fury and the Fallen Ones (2008). Johnson and Riley were onboard in time for Returners (2010), with Tkaczyk joining the fold before the release of their breakthrough album, Get What You Give (2012). They were touring behind Dear Youth (2014) with Davis, but the incredibly collaborative The Ghost Inside (2020) marks his first official recorded appearance.