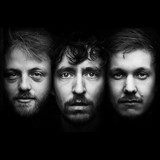 The band WIEBE makes progressive pop-music, with lyrics in both English and Frisian.   Their new album 'Y' is another concept-album, about the process of dealing with heartbreak.   The band consists off Wiebe Kaspers (vocals, keys), Daan Slagter (drums) and Florian den Hollander (bass). Their second album ∆ELTA appeared in december 2016 and is remarkable for its triangular shape. Their new album Y is released in a middle-sized box with multiple booklets, one of them containing the sheet music of all songs(!).   In 2017 the band released their single 'On and on' along with a 360° clip: https://youtu.be/0mLWA1SR5AY.   Later this year the entire album will be released on Spotify.