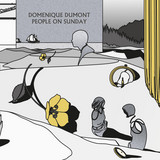 Domenique Dumont was initially referred as a collaboration between Latvian producer Artūrs Liepiņš and singer Anete Stuce, as well as an unnamed, possibly fictional French artist. After formed in 2013 and posting some songs on a whim, French label Antinote released the project's debut mini-album "Comme Ça" in 2015. Playful tunes such as "L'Esprit de L'Escalier" found an underground audience, and the 2018 full-length "Miniatures de Auto Rhythm" was similarly met with acclaim and bewilderment. Dumont was then invited to compose a score for the 1930 German silent film "Menschen am Sonntag". This was performed along with a screening of the film at the Les Arcs Film Festival in the French Alps in December 2019. The music was released by the Leaf Label as the full-length "People on Sunday" in 2020. ~ Paul Simpson, Rovi