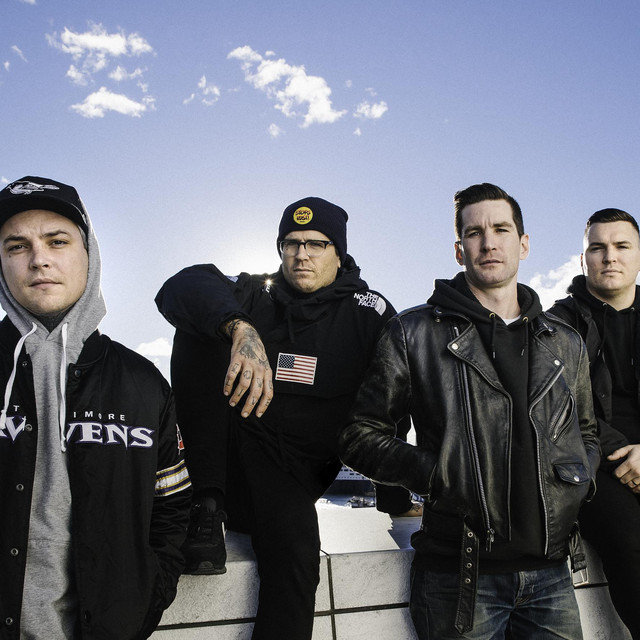 An Aussie metalcore group with highly confessional lyrics and a melody-driven emo-tinged sound, the Amity Affliction emerged in 2008 with Severed Ties. They hit their stride in 2012 with the release of their third full-length effort, Chasing Ghosts, which like subsequent outings This Could Be Heartbreak (2016) and Everyone Loves You... Once You Leave Them (2020), soared to the top of the Australian charts, and found international success as well. Brisbane post-hardcore act the Amity Affliction were formed in 2002 by Ahren Stringer and Troy Brady, a pair of longtime pals -- still high schoolers at the time -- who had been affected by the death of their friend in a road accident. The band -- a quartet rounded out by bassist Garth Buchanan and drummer Lachlan Faulkner -- released a demo in 2003 and an EP in 2004 but didn't start making waves in earnest until sometime later. In 2005, after unclean vocalist Joel Birch joined the fold, Amity Affliction went on a touring spell, working up a nationwide reputation as a powerful live band. In 2007, they added keyboard player Trad Nathan; switched drummers, with Ryan Burt replacing Faulkner; and parted ways with Buchanan, with Stringer taking on bass duties. The newly formed group then hit the studio to record the EP High Hopes, followed in 2008 by the debut album Severed Ties, which peaked at number 26 on the ARIA charts. Amity Affliction toured Australia again in 2008-2009, both as a support and headlining act, and in 2010 they released their second album, Youngbloods, which confirmed that their efforts paid off, reaching number six on the ARIA charts. They would top that achievement just two years later when their third album, Chasing Ghosts, debuted at number one on the ARIA charts. A fourth album, Let the Ocean Take Me, arrived on Roadrunner in 2014 and was the band's second consecutive ARIA chart-topper. That year, Brady left the band, leaving Stringer as the only founding member. After months of touring Ocean, the quartet returned to the studio to record their fifth LP. This Could Be Heartbreak arrived in August 2016, topping the ARIA charts once again. The band toured Australia, the U.S., and Europe in support of the record, before Ryan Burt left the band in February 2018 owing to mental health concerns. Later that year, the Amity Affliction released their sixth album, Misery. Their first concept effort, it featured an overarching narrative chronicling the tale of three friends on a dark quest for vengeance. Two years later the band returned with Everyone Loves You... Once You Leave Them, their first studio LP with new drummer Joe Longobardi. ~ Alexey Eremenko & Neil Z. Yeung, Rovi