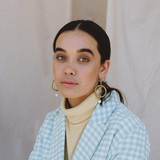 Hailing from the Sunshine State, with a colourful heritage threading back to the hidden hills of India and the sands of Samoa, Tiana Khasi is carefully carving her name – and voice – across the international stage. Khasi (say: Kah-see) is the name of Tiana’s tribe found deep in the North Eastern part of India, high in the hills of Meghalaya. As one of the few remaining matriarchal societies in the world, the Khasi women remain a cornerstone and constant muse in Tiana’s art and music. Influenced by her mixed background and family heritage, the intuitively driven singer takes a unique approach to her creative process, colourfully marrying the different elements of her world together by sampling and recreating imaginations of environments her family came from, understanding her identity along the way. After releasing a live video of 'Georgia's Track' to critical acclaim in 2017, her Sampology-produced debut EP, 'Meghalaya' dropped in 2019 on Soul Has No Tempo. It showcased an arresting display of vocal and songwriting talent, blending eclectic, live sounds with a timeless jazz/soul influence.