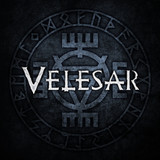 Velesar is a Polish folk metal band founded in 2018 in Cieszyn (initially as a solo project) by Marcin Velesar Wieczorek – a former vocalist of bands Goddess of Sin (2001-2007) and Radogost (2010-2014) and creator of band River of Time (from 2014). The band was born out of the fascination with Slavic culture and history as well as the passion for metal and folk music. The main inspirations come from Slavic mythology, ancient beliefs and rituals but also fairy tales and legends that are a remnant of the rich cultural heritage of the Slavs.On July 6, 2019, the first Velesar's album "Dziwadła" was premiered. The album was recorded with the participation of musicians from such bands as Percival Schuttenbach, Helroth, Radogost and River of Time. The album was ranked 3rd place in the category "Best Debut-Album 2019" by the Dutch portal Folk-metal.nl and also took 3rd place in a contest on "Best Folk Metal Album 2019" in the Polish portal Folkmetal.pl. He was also nominated for Wirtualne Gęśle 2019 Award. The band's second album, entitled "Szczodre Gody", was released in 2021.