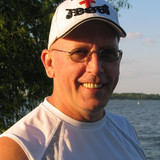 Music, especially gospel music is part of my life blood. Some of my earliest memories involve Sunday afternoons singing and playing gospel music with my family. My grandma, Annie Ruth Krienke was a multi-instrumentalist, and we all sang and played the piano. My Dad, Arvid was the choir director and music leader at our Church in South Bend, Indiana. He sang in many gospel quartets over the years, and even had an album published with The King's Quartet. Having grown up in the 70's, my biggest musical influence was Elton John, who's piano playing and singing I worked diligently to imitate. Then, during middle school & high school I got involved in a partying lifestyle that pulled me far away from my Christian roots. It was then that I began composing my own songs. Later, in the mid 80's I played the local nightclub circuit as keyboardist/singer with the band Justus. But God comes in places unlooked for - unexpectedly. https://open.spotify.com/track/77yQQRcdNZ53pwJbC6lXFJ